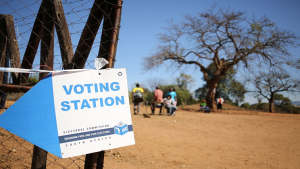 About 22 voting stations in seven municipalities in the Eastern Cape could not open on time due to community protests.

Provincial Electoral officer, Khayakazi Magudumana says  Electoral Commission (IEC) officials could not access the stations in some areas due to trenches that have been dug overnight.

“Few stations where we found the gates with different padlocks. Whenever there are elections, communities would show their anger by frustrating our processes and when stations open, there is enforcement of security in those affected stations and voting happens. So we never had a situation where there is a request that we should extend voting time because there was this delay in the morning session,” says Magudumana.

We are aware of challenges in certain polling stations and all issues are receiving our attention. Ensuring that South Africans exercise their democratic right, safely and with as little disruption as possible remains our top priority. pic.twitter.com/uYd3NiNnCD