Afghan evacuees transit through US air base in Germany 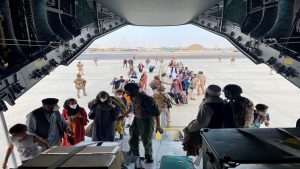 Afghan evacuees have begun transiting through the American Air Base in Ramstein Germany, as the US steps up its evacuation efforts from Afghanistan.

Video released by the US Department of Defense on Friday showed US soldiers at the base providing assistance to Afghan families.

The evacuees would be provided with medical screening, food and temporary lodging, the Defense Department DVIDS site, which released the video, said.

On Friday, the US government said that a dozen countries, from Europe to the Middle East and Central Asia, will allow Americans and others evacuated from Kabul.

The United States is desperately trying to evacuate thousands of people from Afghanistan as reports of Taliban reprisals against Afghans who worked with US-led forces increase, forcing foreign powers to accelerate the evacuation effort.

But officials said no evacuation flights left Kabul for nearly six hours on Friday because they had nowhere to go due to an overflow at Al Udeid air base in Qatar, already sheltering 8,000 Afghan evacuees.

Those flights have now restarted.

More than 18 000 people have been flown out since the Taliban militants took the capital Kabul, according to transatlantic alliance NATO.

The United Arab Emirates has agreed to host 5 000 Afghan evacuees for 10 days on their way to a third country at the request of the United States, its foreign ministry said.

German Foreign Minister Heiko Maas said in a statement that Berlin had agreed with Washington to shelter people temporarily at Ramstein Air Base.

It was not immediately clear which other European countries would be involved.