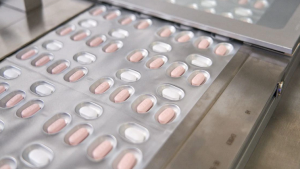 Africa’s top public health body said it was in talks with Pfizer about securing supplies of its antiviral COVID-19 pills for the continent, the latest to join the race for a drug seen as a potential game-changer in fighting the virus.

The Paxlovid medication was nearly 90% effective in preventing hospitalisations and deaths, and data suggested it retains its effectiveness against the Omicron variant, Pfizer has said.

“We are in really close discussions with Pfizer to see what can be done to make the drugs available on the continent and accessible on the continent, that is, the Paxlovid drugs,” said John Nkengasong, director of the Africa Centres for Disease Control and Prevention.

Governments around the world are scrambling to buy Paxlovid, while Merck’s Molnupiravir has faced setbacks after disappointing trial data.

While vaccines have been governments’ main weapon against COVID-19, there are hopes Merck and Pfizer’s experimental pills – taken at home rather than in hospital or medical centres – could be key in reducing the chances of dying or hospitalisation for those most at risk of severe illness.

Nkengasong said obtaining supplies of COVID-19 drugs was one of three key strategies for combating the pandemic in Africa in 2022, along with scaling up vaccinations and testing.

Such drugs would be crucial if another highly transmissible variant were to emerge and public health systems become overwhelmed, he said.

“The only way to relieve that will be if we have drugs like Paxlovid where people can take that drug and stay home and get relief, and that way the burden and the constraints on the health system will be limited,” Nkengasong told an online news briefing.

While wealthy countries, including the United States and Britain, have secured deals to buy the pills, concerns have grown that low-income countries would lag in this effort due to tight supplies, as was the case in the scramble for vaccines.

The US government’s contract for 10 million courses of the drug is priced at $530 per course, a price that would put it out of reach for many poorer countries.

To mitigate that issue, Pfizer has agreed to allow generic manufacturers to supply versions of the treatment to 95 low- and middle-income countries through a licensing agreement with international public health group Medicines Patent Pool (MPP).

Africa has officially recorded just over 10 million cases of COVID-19 since the start of the pandemic, although the real number is likely much higher due to patchy testing.

Addressing a separate briefing, a senior official from the World Health Organization’s Africa office said it appeared that a fourth infection wave on the continent driven by Omicron was flattening, marking the shortest surge in cases to date.

“It is (a) plateau … but we are careful and we are observing for the upcoming couple of weeks to make sure,” said the WHO regional emergency director Abdou Salam Gueye.