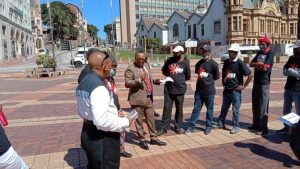 AIM leader, who is popularly known as Khusta, was a political activist in the 1980s and formed the Port Elizabeth Youth Congress, which was later known as UDF.

Jack emphasised that the AIM was not a political party,  but a residents’ pressure group advocating good governance, competent leadership and excellent services to all the Nelson Mandela Bay Metro residents.

The Nangoza Jebe Community Hall was packed with AIM supporters.

The movement hopes to bring a total vision and change to the metro and to put the needs of residents first. During its election manifesto,  the party outlined a 10-point plan. This in pursuit of implementing local government of unity and a best-fit metro administration. They will be contesting in all the sixty wards in Nelson Mandela Bay.

“The ten-point plan basically deals with all problems that everybody knows about, youth unemployment, gender-based violence, infrastructure, service delivery lacking there, the way municipality is run. We want to make sure we raise the quality of people who come, the councillors, we want to get the municipality to work properly,” says Jack.

One of AIM supporters Maxhoba Buwa says his vote will bring change in his community.

“AIM is the organisation for abantu which is abahlali, we are tired of politicians because they have come to us promise this after dishing out t-shirts, they don’t do any service in our communities,” says Buwa.

Party ward candidate Brian Whitbooi says AIM is the only hope for the people of the Nelson Mandela Bay region.

“Our ten-point plan, its a local movement for the people it about the support, situation where we find ourselves, some people have lost hope, we want to bring people back, give them hope again,” says Whitbooi.

Khusta Jack has added that his party is not looking to enter into any coalition, but rather get as many seats as possible.