An urgent bail application for Parliament arson accused to be heard 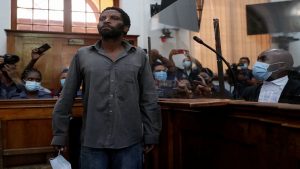 An urgent bail hearing of alleged Parliament arsonist, Zandile Christmas Mafe, is expected to be heard in the High Court in Cape Town on Saturday morning.

Mafe started his 30-day mental observation at Valkenberg Psychiatric Hospital on Thursday after a bed was secured for him.

He was arrested for the blaze which gutted parts of Parliament earlier this month.

This week, the NPA argued for the accused to be referred to the psychiatric hospital for mental observation following a diagnosis of paranoid schizophrenia.

NPA spokesperson Eric Ntabazalila says, “The NPA can confirm that it has received a notice of motion for an urgent application for bail at the High Court of South Africa, Western Cape division for Zandile Christmas Mafe.”

Meanwhile, EFF leader Julius Malema says negligence was the main cause of the recent fire that gutted the National Assembly buildings at Parliament.

He says the arrest of the so-called suspect, Zandile Mafe, is being used as a scapegoat to divert attention from government’s negligence.

“Do you think in your rightful mind, a person would burn Parliament and then goes and sleep next to where you have committed a crime… there’s no such thing. So I think more than anything guys, it’s negligence. They’ve not maintained Parliament, you may find out the rats have eaten the cables, that’s why it started burning from the roof and there was a spark and that spark caused the fire,” says Malema.

Malema says negligence was the main cause of the fire: