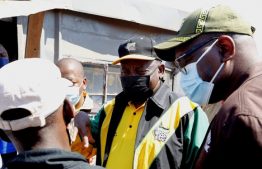 He was speaking during while campaigning in Tembisa, east of Johannesburg. The ANC is governing Ekurhuleni through a coalition with five other political parties. They include the PAC, the AIC, the IFP, the Patriotic Alliance and the Independent Ratepayers Association (IRASA).

Ramaphosa expresses confidence in an ANC victory in Ekurhuleni:

This has given the ANC under Executive Mayor Mzwandile Masina a serious challenge when the metro has to pass its budget. But after interacting with the residents in the area, Ramaphosa is upbeat about what he expects to be a landslide victory.

“We have been here in Ekurhuleni since the morning, we have met many of our people here and all I can read and sense is quite a lot of satisfaction with what our metro has been doing here. There has been a lot of development here in this area. When I last came here in 2016, we didn’t have all these houses, 15 000 housing units. So here I am confident that the ANC victory is assured that people here support the ANC and love the ANC because they can see what the ANC is doing and delivering. ”

Ramaphosa was forced to quell a tense situation between warring ANC factions outside the venue where he was getting a briefing before he starts his election campaign in Ward 6 in Tembisa east of Johannesburg earlier on Sunday.

He is leading the ANC campaign trail in Ekurhuleni with door-to-door and community meetings planned for the day.

The two factions are fighting over their councillor election process.

Some of them say the selected councillor Patrick Giyane who also disrupted the SABC live crossing during their clash was imposed on them.