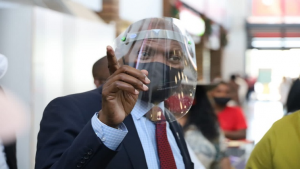 ANC President Cyril Ramaphosa has spoken out, for the first time about the R150 million Digital Vibes contract with the Department of Health and the involvement of the former Minister Dr Zweli Mkhize.

Ramaphosa says this is a matter of concern. Ramaphosa was addressing the media at the ANC headquarters in Johannesburg.

“The issue of the Digital Vibes that we took too long and so on, we didn’t fire the minister. I have to say that it may look like we took too long, the SIU had to issue a number of iterations of their report. They came with the first version and then they continued and that one was to say we are making progress but we still need further work to be done and then they went back and did further work, and then when their work was completed. We knew what they layer of the land was.”

The Presidency says the Department of Health must work quickly to resolve and implement all of the SIU recommendations contained in the Digital Vibes report.

The report found that the Department’s Acting Director-General, Dr. Anban Pillay, committed fraud, gross misconduct, was negligent, and in dereliction of duty in irregularly awarding Digital Vibes a communications contract.

Chair in the field of Social Security Systems Administration and Management Studies at the Wits School of Governance, Professor Alex van den Heever shares more on the report findings:\

Ramaphosa has described as challenging, the process of implementing the party’s 54th national elective conference resolutions, which include the “step aside” resolution.

Ramaphosa says some ANC members misinterpreted this resolution and thought they were being targeted.

Ace Magashule, the now-suspended ANC Secretary-General, was among the first casualties of the resolution.

Ramaphosa says the ANC will do more to implement resolutions including eradicating corruption in government.

“The implementation of the 54 national conference resolutions on ANC members who have been charged or implicated in corruption has been challenging, but we have largely succeeded in meeting the directives of the conference – as it was given in 2017. We raise these issues in perpetration for the local government elections because it is important for us to demonstrate to the people of South Africa that we are making progress.”