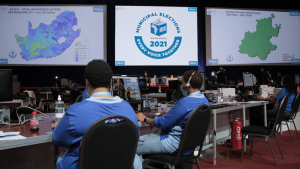 IEMSA executive chair, Terry Tselane says after voting stations close at 21h00, it is time to tally the votes.

“As the voting station closes for voting, it turns into a counting station and the officials of the commission will then start counting the ballot after that they capture the results into a result slip and go to a municipality where that information is then captured into the system.”

It will be a long night for some counting stations as officials begin the process of counting the votes.

Tselane says the counting process is not always straight-forward, as a deadlock can be reached in some cases. He says an unconventional method – the casting of lots – is then used to decide who the winner is.

A coin is flipped, and the winner of the ward is determined by a coin toss.

Terry Tselane explains what happens when two candidates receive the same number of votes in a ward: