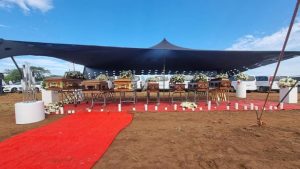 The bail application of a 52-year old man who allegedly killed seven of his family members on Christmas Day in Limpopo has been postponed to the 4th of February.

The accused, Enoch Ndou, allegedly shot and killed the seven people at the Jimmy Jones village.

He appeared at the Malamulele Magistrates court on Friday morning.

Ndou was arrested after he handed himself over to police in Thohoyandou.

Police have since said that they suspect a dispute over a family house as the possible motive for the killing.

Police further say the accused was reportedly at odds with his elder brother’s sons over a house left by his late father.

The new year marked a sombre start for the family and friends of the murdered family members.

In the video below, a report on the family’s mass burial: