Ballot printing bungle in Johannesburg, Ekurhuleni to put elections in jeopardy in the 2 Metros: Analyst 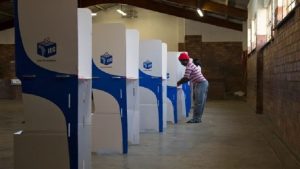 Elections of the highly contested Johannesburg Metro, as well as the Ekurhuleni Metro, could be invalidated. That is according to Political Analyst, Professor Susan Booysen.

This follows complaints by the Change Party that a ballot printing bungle by the Independent Electoral Commission (IEC) made it difficult for their voters to correctly vote for the party, which, they say, translates into the elections not having been free and fair.

The party earlier on Monday lodged a complaint with the IEC after their logo appeared with the wrong name (Active Movement for Change) on the Proportional Representation (PR) ballot for the Johannesburg and Ekurhuleni Metros.

According to Booysen, the implications of the IEC’s mistake could become catastrophic if not handled with care. Booysen says the party could take the matter to the Electoral Court, which could result in the elections in the two metros being invalidated.

“If the elections are invalidated, in the worst-case scenario, it would mean those metros have to into a new elections circle. There have to be probably new nominations. I don’t know. It could be that the Electoral Court gives judgment to say rerun the voting process and not the entire electoral process. But as a minimum, if that party is really angry and wants to take it forward, it would mean that the whole thing can be invalidated.”

Booysen says the best route to go would be for the IEC to try and reach a compromise with the party.

“From my side, I observed that the party went through two days of special ballots, without noticing itself that they were not on the ballot and they didn’t lodge any complaint. So, if the IEC is lucky they could possibly reach a compromise with the party.”

But what kind of a compromise?  “If they could get a very accomplished statistician, for example, to say we can see political parties that got this much on the ward side and this converted by statistical formula comes to 1.1 or something like that. So, I think by statistical calculation it should be easy to calculate what is a typical conversion per municipality from ward proportion to proper proportion. So, if the IEC is lucky they could reach that compromise,” explains Booysen.

The party is up in arms and says they have been locked up in meetings with the IEC most of the day trying to resolve the issue.

“We have been locked in the meeting with the IEC since this morning, trying to resolve the issue. Look, we get angry and we get disappointed but we still need to be mindful of the fact that we have still need to have a country tomorrow. Now, the question is can we find each other and resolve this matter. It’s been difficult. I can tell you that much. It has not been easy. We are still going into another meeting to try and resolve this matter the best way possible,” says party leader, Lesiba Molokomme.

The Change Party, a breakaway party from the ACDP, largely focused on being “the voice of the citizens and especially the 86% plus population of Christians,” is one of the smaller parties contesting in the Johannesburg and Ekurhuleni metros. However, Molokomme has denied that the mistake by IEC would be so insignificant to have telling implications on the outcomes of the elections.

“I do not agree that what we are doing is insignificant. Of course, we may be a small party but this is a huge mistake by the IEC and if it can happen to us, it can happen to anybody which is not good for our democracy.”

Without giving details out, Molokomme says they are willing to reach a compromise with the IEC.

“The truth is at this time of the day, what are the reasonable chances of the IEC printing four million ballots and getting people to vote again. So, we are willing to reach a compromise with the IEC and hopefully, we will find each other.”