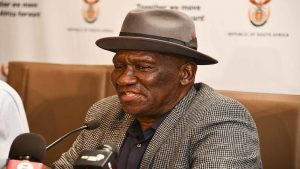 Popcru has called on Police Minister Bheki Cele to desist from making pre-emptive comments, following his announcement that there won’t be any salary increases for police officers for the next three years.

Cele was delivering his budget vote speech in the National Council of Provinces when he made the comment.

Popcru spokesperson Richard Mamabolo says the Police Minister prematurely made the announcement while the salary negotiations were still underway.

“We find it disturbing that we would have a Minister who makes such presumptions especially being the Police Minister. He would know that there are a lot of challenges, there’s been a lot of budget cuts over the years and of course, police require funding to ensure SAPS function properly. As unions, we have been in meetings with the department to see if government can improve on this and it’s unfortunate pre-emptive for the Minister to suggest that there won’t any salary increase in the coming years.”

Meanwhile, Police Minister Bheki Cele says 150 posts are expected to be filled in the police’s Forensic Chemistry Laboratory by the beginning of July. The unit specialises in the examination of physical exhibits from a crime scene.

Cele has acknowledged that the Lab has been battling with capacity challenges for years.

“In addressing the issues of capacity, a total of 127 scientists have been promoted to critical posts within the FSL (Forensic Chemistry Laboratories) and an additional 150 posts of forensic analysis warrant officer level have been advertised externally and  the new incumbents will commence on the 1st of July.”

Police Minister admits to DNA forensic backlog during a debate in parliament: