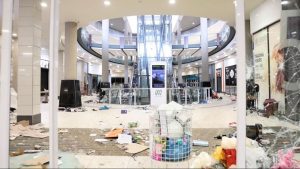 The Black Business Council has accused government of excluding black businesses in the rebuilding work related to last month’s social unrest. The council says the state insurer SASRIA is only appointing white suppliers for the reconstruction work linked to the unrest.  Meanwhile, Massmart says it was able to mobilise around R13-million to support workers and communities that were affected by the looting in KwaZulu-Natal.

The Black Business Council has slammed the alleged claims by SASRIA and other private insurers that they can’t find black supplies for the rebuilding work linked to the unrest.  SASRIA says it has allocated R700-million for private insurers to pay out claims under one-million-rand.

Gregory Mofokeng of the Black business Council says, “One of the issues that we’re already witnessing is that the beneficiaries of all this work that must be done now is the white owned businesses to the exclusion of black businesses. Let me make an example, if you look at what is now happening with SASRIA, and we had an engagement with SASRIA a week ago, the loss assessors that are now going to ascertain the loss are mainly white companies. The people that are being called to fix the damage that was caused are also white companies.”

Mofokeng says the council is worried about corruption in relation to the money set aside by the Unemployment Insurance Fund to support workers working in businesses that were affected by the unrest.

“Once this kind of an arrangement was put in place, we had people with corrupt intentions actually hijacking the system. We were happy that there were actually some arrests as a result of the corruption that happened under TERS and we are hoping that our systems this time around are fortified so that we do not have these opportunistic elements coming through.”

Massmart says it is prepared to rebuild and invest further into the South African economy despite the property damage and looting at 43 of its stores.

“We are rebuilding what has been destroyed in KZN, the Makro store that has been destroyed in Pietermaritzburg, as well as Springfield and our redistribution centre. But what we’ve said to the authorities and what we’re saying to the public is that we are still very committed to investing in the growth and development of KwaZulu-Natal and the Gauteng province.”

Massmart says it is prioritising black suppliers in its rebuilding and reconstruction project.