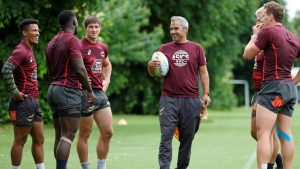 The Springbok Sevens are all smiles ahead of this weekend’s HSBC London Sevens.

Following their knockdown from their perch of the World Series by Argentina last weekend, coach Neil Powell has called up experienced duo of Sako Makata and Angelo Davids in the place of injured duo, Tiaan and JC Pretorius.

Makata last played in Singapore in early April, but picked up a rib injury and was not considered for the trip to France, while Davids will play in the 2022 World Series for the first time, having last played for the Blitzboks in Vancouver in 2021, where he was named in the tournament’s Dream Team.

Davids, who was donning the DHL Western Province jersey during the first seven tournaments of the HSBC World Rugby Sevens Series, said he was still doing ‘Sevens stuff’ to keep sharp and felt he integrated well already.

“We had a great session today and I think one of the reasons was because the guys had their smiles back. We had no luck in Toulouse and that compounded the mistakes we were making. I am positive it will be fixed this weekend,” says Davids.

The Blitzboks had a terrible run out in France last weekend, which saw them suffer a shocking 24-21 to Scotland in the 9th place semi-final. For Sako Makata, watching the Blitzboks grind to a stuttering halt in Toulouse was a painful and frustrating experience.

“Watching from the outside was agonising as you feel you can do things differently, but it is maybe because you are watching from a different perspective being far away”, says Makata.

For the new arrivals it is all a matter of contributing as much as possible.

“I was gutted to miss out on the most of Singapore and then Vancouver and obviously Toulouse, but now I have another chance to contribute, and I want to make it count,” said Makata, who was in fine form before injury struck.

The Blitzboks are in Pool B and will take on Argentina, Ireland and Kenya on Saturday