Blitzboks want to make it two in a row in Dubai 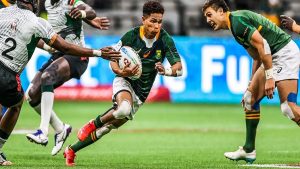 South Africa’s Blitzboks will be looking to go one better this coming weekend and make it two out of two in Dubai Series victories, on the back of a record-breaking unbeaten run of 18 matches on the World Rugby Sevens Series last weekend.

Neil Powell and company though will make do with only 11 players for the two-day tournament due to injuries and cannot call up any replacements because of travel restrictions imposed on South Africa due to the new COVID-19 variant, Omicron.

The Blitzboks have set many milestones in the 2021/2022 season; a new record of consecutive World Series match victories, two more than their previous best run in the 2008/09 season of 16, coupled with their fourth Dubai final appearance in the past five years and topped off with an 8th Dubai tournament win.

It was also the team’s third straight tournament victory this year, one they will be looking to add onto this coming weekend, but that task has been made a whole lot harder with injuries to an already depleted squad.

Despite the challenges ahead, there’s still a job to do and the players are up for it.

“The whole team is on the same page. We cannot sit back and think about last weekend. Every game is a new game; every team is different every weekend. So we take it game for game so it is never that we are thinking about last weekend. We never settle on what we did and I think we keep on working and we will see how this weekend goes,” says Tiaan Pretorious, a South Africa’s Sevens player.

Stalwart Muller du Plessis has been ruled out with a leg injury and will return home as soon as possible for further examination, while Ryan Oosthuizen will be given as much time as possible to recover from his ankle niggle.

“Like our captain Shakes Soyizwapi says, we have to be mentally prepared. Yes, our bodies are physically sore, but we have to be mentally charged and our minds must be pushing us through as a team and get the goal that we want this weekend. We cannot underestimate any team. We have a target on our backs now and teams will be gunning for us. With the bunch of players that we have, all we have to do is enjoy ourselves, we trust one another, we are a band of brothers and we will always have one another’s back to perform at our best,” says Zain Davids a South Africa’s Sevens player.

The Blitzboks have been drawn against the same pool opponents they faced last Friday – Japan, Ireland, and Great Britain. After this weekend, the series takes a break and returns for round three and four which will be hosted in Spain between the 21st and the 30th of January next year.