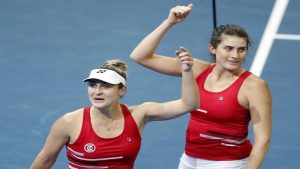 Formerly called the Fed Cup, the event was renamed last year in honour of American 12-time major winner King and restructured into a ‘World Cup of tennis’ format concluding with 12 nations competing over one week for the title.

Canada were the last of 12 teams to make the cut, replacing previous hosts Hungary in the draw due to their status as the highest-ranked side to win a playoff tie in April this year.

It was the fifth meeting between the French and Canadians – the first in 28 years – with the holders heading into the Centre Court contest at the O2 arena with a 3-1 head-to-head advantage.

At the start France’s Fiona Ferro, who reached a career-high ranking of 39 earlier this year, clearly looked the superior player in her first meeting against the 353rd-ranked Francoise Abanda, quickly going up by a set and a break.

But Abanda dug deep to take down Ferro 4-6 6-4 6-4 for her fifth consecutive win in the competition.

Alize Cornet, the highest ranked French singles player at 59th, managed to stave off the big-hitting Marino 6-4 7-6(5) to level the tie at 1-1.

But Marino soon had her revenge as she returned alongside Dabrowski, the world number five in doubles, to beat Cornet and Clara Burel 6-3 7-6(6) in the deciding rubber.

With the Russian Tennis Federation, whose entire squad is ranked in the top 50, the third Group A team, France will face an uphill task to make it to the semi-finals.

The sides play two group-stage ties to determine the winners of the four three-team groups, who progress to the semi-finals.

In Belgium’s Group B tie against Belarus, Greet Minnen and Elise Mertens won their singles rubbers to seal the tie in the presence of a sizeable number of Belgian fans, who came with drums, trumpets and other musical instruments on Court One.

Minnen celebrated her debut in the competition with a commanding show, the 24-year-old handing Belgium the first point with a 6-2 6-2 win over the 263rd-ranked Iryna Shymanovich.

World number 18 Mertens staved off a spirited fightback from Aliaksandra Sasnovich for a 6-2 4-6 6-2 win and sealed the tie against the Belarusians, who are missing world number two Aryna Sabalenka and multiple major winner Victoria Azarenka in Prague.

Mertens, winner of three major doubles titles, and Kirsten Flipkens could not make it 3-0 for Belgium in the doubles rubber, however, going down 6-4 6-3 to Sasnovich and Vera Lapko.

Australia are the third team in Group B.

In the evening session, hosts Czech Republic, who have won the title six times since 2011, begin their campaign against Group D rivals Germany while Spain meet Slovakia in Group C.