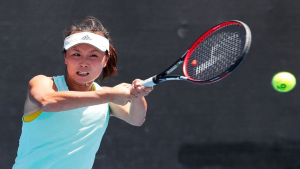 He said the issue of Peng Shuai should not be politicized.

Peng had disappeared from public view since she alleged on social media on November 2 that former vice-premier Zhang Gaoli had coerced her into sex and they later had an on-off consensual relationship.

Peng also had a video call on Sunday with the president of the International Olympic Committee and told him she was safe and well, the IOC said after Western governments expressed mounting concern for her well-being.