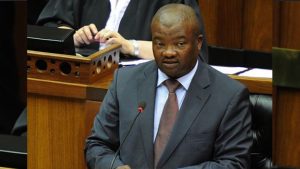 In a conversation with the SABC on the party’s manifesto ahead of the upcoming local government elections, Holomisa says the history of South Africa since democracy has taught the electorate that one-party dominance at local level breeds corruption.

He says he is confident about the role his party has played in the new dispensation as it will continue to be the vanguard of the people by rooting out corruption.

The UDM, established in 1997 is also amongst the breakaway parties from the oldest liberation movement on the continent, the ANC.

Holomisa says despite a decrease in support, he’s confident and not worried about the party disappearing from the South African political landscape.

Currently, the UDM is the seventh-largest political party in Parliament, having moved from 14 members in the National Assembly to two. He says the UDM has exposed corruption at both national and local government.

Holomisa says, “The UDM from the start, it has been batting on a wicket of anti-corruption and promoting the ethics of good governance and I’m happy that at least we managed with other opposition parties to force that there be a Commission of the State Capture which was recommended by then Public Protector, Thuli Madonsela.”

He says, “So the people of South Africa now are aware and I think that campaign has been reinforced by even other political parties including the ruling party to say indeed there is a misuse of Government funds. So I’m not worried about that, instead, I’m celebrating.”

Despite the party’s stance on corruption, Holomisa says he is unapologetic about supporting the late Mayor of the Nelson Mandela Bay metro, Mongameli Bobani after corruption allegations were levelled against him.

An arrest warrant was issued for Bobani on the day of his funeral last year. The Hawks confirmed that Bobani was one of the nine suspects accused of fraud and money laundering exceeding R 56-million.

Holomisa says, “Unfortunately, the people who accused him then was the DA (Democratic Alliance) and I said to the DA, go to the council, don’t come to us and say remove this man, he’s corrupt because you’re referring to an issue of 2010 long before we even came into the government. I said go to the council.”

“ If the council investigates him then the ethics committee of the council will take a decision then immediately after that is done, we will suspend Bobani pending the outcome or expel him. Secondly, if you can’t do that go to the police and report the case then immediately if the police say there is prima facie evidence, then immediately we will do so but we can’t take instructions from you, unfortunately. We are willing and we have said so publicly so we have always been cooperating. Unfortunately, they waited for years, otherwise, we would have acted,” he adds.

Holomisa has criticised the country’s criminal justice system, accusing it of selective amnesia. He says the case involving French arms company, Thales and former President, Jacob Zuma is one instance where not all those who have been implicated have faced consequences.

He says, “It was not Zuma alone who benefited in the arms deal, we all know that. What happened to the list of people who received Mercedes-Benz cars. There were many of them out of that deal. Secondly, if you look at the way that, that transaction has been handled, we are focusing only on Zuma and the French company.”

“We are not saying he must be exonerated but we are saying why are you suffering from selective amnesia? What about the rest, who benefited from the arms deal? There are many of them. The issue of people who have been accused of corruption, the NPA has got a bunch of dockets but they are not being charged. So I’m saying, therefore, it would appear that the criminal justice system, not judges, seems to be suffering from selective amnesia.”

Holomisa has been the leader of the UDM for more than two decades and says he is still in charge. On whether he would serve in Cabinet, the General maintains his disinterest in positions and says he left the African National Congress defending a principle and will not be bribed.