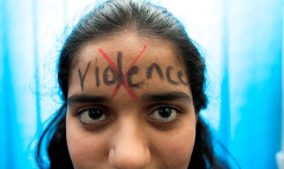 Community members from Quigney in East London in the Eastern Cape have held a short prayer session to show solidarity for Nosicelo Mtebeni.

VIDEO | Prayer for service for Mtebeni:

Mtebeni was brutally murdered allegedly by her boyfriend in Quigney and her body parts were found on Thursday. A local church leader who led the prayer service, Pastor Corne Pretorious says the incident has shocked the community and as the church, they want to bring hope to residents and her family.

“There are so many things that have happened over the past couple of years, in our neighbourhood, in our nation and this senseless murder has just highlighted that again. Especially just the marginalisation of women, of young and vulnerable. We are just saying as the church, you know what we are so much better than this. There is hope for this nation, but we have to listen to the voiceless. We have to listen to our women, we have to listen to our young people, the youth, to our students that are crying out and saying we are desperate we feel unsafe.”

Meanwhile, the caretaker at the residence where the suspect and the deceased stayed, Phumeza Qwabe says the incident has shocked them. She added that tenants at the house are not coping with the incident.

“My tenants are not coping, they can’t sleep at night, it has affected them and I think they will need counselling. Because there are people who are staying with children, there are women who stay around here and they are thinking am I next. I think we are all going to need counselling after this.”

The University of Fort Hare has expressed shock about the murder of 23-year-old LLB student Nosicelo Mtebeni.

Her remains were found dismembered in a suitcase, while other body parts were found in a plastic bag inside a house at Quigney in East London.

This was after she allegedly got into a fight with her boyfriend.

The final year law student’s brutal death has been condemned by many students, the institution and gender-based violence activists.

Masimanyane Women’s Rights International organisation has described the murder of the student as an insult to Women’s Month.

Students alongside gender-based violence activists picketed at the scene where her remains were found.