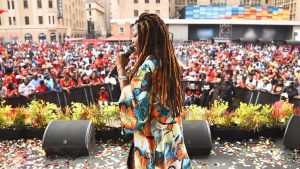 The Democratic Alliance (DA) has called on Police Minister Bheki Cele and Electoral Commission (IEC) Chairperson, Glen Mashinini, to lodge a joint review of what the DA says appeared to be the Economic Freedom Fighters’ (EFF) blatant illegal campaigning when it unveiled its election manifesto in central Johannesburg on Sunday.

LGE 2021 | EFF launches manifesto ahead of the 2021 municipal elections

The DA says in a statement that the EFF showed no regard for the rule of law when it flouted lockdown regulations.

DA Chief Whip Natasha Mazzone says it is clear more than 500 people gathered for the EFF event and it was therefore illegal.

“It cannot be that one political party can flagrantly break election rules and have no consequences to their actions. If the Democratic Alliance had done this, I can guarantee you we would have received a letter saying you are breaking regulations and you are going to be disqualified from the elections. How is it possible that the EFF has Bheki Cele so far down their back pocket that he hasn’t already sent a group of police to disperse the crowds?” says Mazzone.

South Africans have been forced to live by the ANC’s senseless lockdown. However, there cannot be one set of rules for citizens and another for the EFF.

The DA calls on Bheki Cele, and the IEC to lodge a joint review of what appears to be blatant illegal campaigning by the EFF. pic.twitter.com/at2LPcd32Y