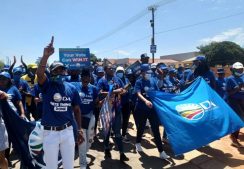 Eskom earlier said it would extend stage two load shedding nationwide for Monday and Tuesday nights from nine in the evening until five in the morning.

Phalatse says Moerane’s Kelvin Power Station announcement is just a two-year extension of an existing 20-year contract and that it won’t be enough to offset load shedding.

Phalatse says she would bring power stability to Johannesburg by addressing the backlog of City Power infrastructure, ensuring adequate budgeting every financial year and only agreeing to take over Eskom-supply areas once the power utility has repaired and upgraded their infrastructure in places like Soweto, Orange Farm and Ivory Park.

During campaigning in September, Phalatse vowed to accelerate the delivery of basic services across the city.

Phalatse, a qualified medical doctor, also served in the city as a member of the Mayoral Committee for Health and Social Development.

She says her administration has already targeted a number of areas they plan to focus on.

“My administration will work with the city’s officials and entities to provide the following:  access to clean drinking water for all residents, water leaks fixed within 24-hours, potholes filled within 72-hours, a vast reduction in electricity outages, more recycling in collaboration with reclaimers and clean streets,” says Phalatse.