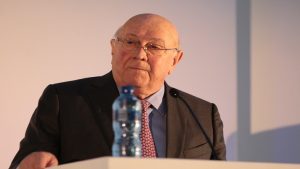 The last apartheid president FW de Klerk was raised within the fold of the Reformed Church, one of the so-called three Sister Churches which includes the Dutch Reformed Church. University of Stellenbosch Systematic Theology Professor, Robert Vosloo says these churches provided a Biblical justification for apartheid and influenced a moral foundation for the apartheid policy of the National Party.

When the National Party won the election in 1948 with apartheid in its slogan, the Dutch Reformed Church, spoke of apartheid as church policy. The brutal system of forced segregation was preached from the pulpit.

The Dutch Reformed Church, and its two sister churches which include the Reformed Church, was held in high regard, as it played a pivotal role in the upliftment of the Afrikaner during the first half of the 20th century.

Professor Vosloo says the church and state were interwoven in a complex relationship.

“At one stage, the moderator of the Dutch Reformed Church, Koot Vorster was the brother of the Prime Minister BJ Vorster. So, one sees that in many ways it was very difficult within Afrikaans-speaking circles to separate the power of the church and the power of the state and that made it difficult for the church to play a necessary prophetical role in society also as a critique of the ideology and injustices of apartheid.”

Vosloo says there were, however, some who publicly spoke out, such as Beyers Naude.

But it would be decades before this church would accept and declare that apartheid was a sin.

Cleric and Human Rights Commissioner Chris Nissen lauded him for his last video message to the public in which he apologises for apartheid.

“Apartheid was declared a crime against humanity, not only by the UN and other international institutions, but also by the world council of churches, and there were many people in the Christian church and in Islam that fought against apartheid, and declared apartheid not only a sin but also a crime against humanity. But we must also understand that there are people like Beyers Naude and other ministers in the Dutch Reformed Church that were not part of the liberation movement that stood out and fought,” says Nissen.

Professor Vosloo says de Klerk too would have been influenced by the church he was raised in.

A private funeral will take place on Sunday and also not open to the media.

A look at FW de Klerk during apartheid years:

President Cyril Ramaphosa has declared that the National Flag be flown at half-mast from sunset Wednesday until Sunday evening as a mark of respect for the late former Deputy President FW de Klerk.

The Presidency says the government will at a future date host a State Memorial Service in remembrance of the former Deputy President.

In the video below, President Ramaphosa sends condolences to the De Klerk family: