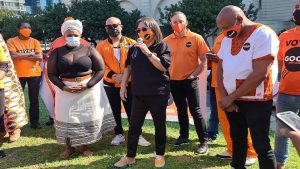 GOOD party leader Patricia de Lille has taken her local government elections campaign to Gqeberha in the Eastern Cape, urging residents to cast their votes for her party which has robust plans to fast track service delivery.

She also had words for the DA-led coalition in charge of Nelson Mandela Bay Metro, saying they have taken residents of the metro for granted.

She says a huge allocation of the metro budget is for affluent areas whilst the northern areas and townships are neglected.

“We have been building and growing the party and preparing local government elections so I am happy to see that growth in the city. I am here to see that problems have been addressed already by GOOD candidates even before the elections, I came to see what they have done,” says De Lille.