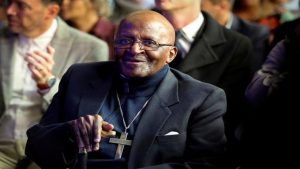 The Archbishop Desmond Tutu Trust says the defacing of his mural in the Cape Town CBD shows that work still needs to be done to restore humanity in the country.

Derogatory words were penned on the mural.

Acting Chairperson of the Trust, Dr Mamphela Ramphele says the incident casts a slur on the country.

Tutu was also the target of hateful graffiti during the struggle in 1989.

Ramphele has called on South Africans to work through issues from the past to build an inclusive nation.

She says the acts fly in the face of what the cleric stands for, which is non-racialism, justice, compassion and love.

Racist who desecrated Archbishop Tutu mural in Cape Town must be identified and prosecuted.

The person responsible for writing, “Ek is ‘n k…”, on a mural of Archbishop Desmond Tutu in central Cape Town will have been filmed in the act by the City’s security cameras. pic.twitter.com/2DBbxWMg5p