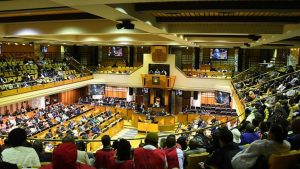 The challenge to the rules of the National Assembly by which heads of Chapter Nine institutions can be removed from office has entered a new phase.

The DIA has introduced a new challenge that was not raised by the Public Protector. They say the new rules are unconstitutional because they did not involve public participation.

The DIA has been openly supporting the Public Protector in her legal troubles. The organisation has already raised thousands of rands to help her cover some of the personal costs imposed by courts.

Their legal representative, Advocate Vuyani Ngalwana, says the making of the rules is a lawmaking process and should, therefore, have been canvassed with a wide range of South Africans.

DIA is arguing that Parliament has no power to pass rule:

Like the Public Protector earlier this week, the DIA has also argued that the appointment of a judge by the Speaker was unconstitutional.

Based on the rules, Speaker Thandi Modise had appointed a panel of experts led by retired Judge Bess Nkabinde to advise her on whether there were grounds for a parliamentary investigation.

Ngalwana says the Speaker has no such authority. Another of the DIA lawyers, Advocate Nomgcobo Jiba, says like judges, whose rulings are regularly overturned by higher courts, the Public Protector should not be impeached for incorrect rulings.

Jiba was once the Deputy National Director of Public Prosecutions until she was removed by President Cyril Ramaphosa in 2019 following an inquiry that recommended her removal. She has since returned to practice as an advocate after she restarted her career from scratch.

Advocate Andrew Breitenbach for the Speaker told the court that nowhere in the constitution is there a requirement for Parliament to enact legislation for the removal of heads of Chapter Nine institutions as suggested by the DIA.