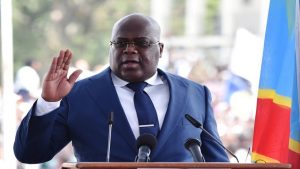 The Democratic Republic of Congo is set to become the seventh member of the East African Community (EAC) following approval by the regional bloc’s council of ministers.

The next step is for Heads of State from the region to deliberate on the country’s application during their extraordinary summit on Wednesday.

At a council of ministers meeting held last month, the powerful structure said DRC is fit to join the EAC.

The partner states are eyeing a market of 90 million people as well as a mineral rich economy, which would push the EAC market to 260 million people and a combined GDP of $240 million up from $193 million at present.

DRC is currently a member of the Southern African Development Community (SADC) and despite its close proximity to East Africa, it trades more with its SADC partners Zambia and South Africa.

VIDEO: In 2016, South Sudan was admitted into the EAC as the sixth member state: