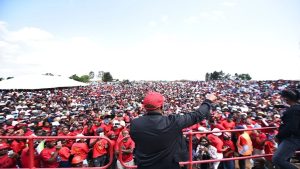 The Economic Freedom Fighters (EFF) has described their victory at Robben Island in the local government elections (LGE) as groundbreaking and a sign that the party is growing.

The EFF scooped over 51% of the vote in the local government elections.

The island is significant to South Africa’s history for the political imprisonment of anti-apartheid struggle stalwarts.

The voting district was previously dominated by the ANC.

EFF Western Cape Spokesperson Dr. Wandile Kasibe, says, “The red wave of EFF has entered the Robben Island. Now, we have majority of the votes from the residents of Robben Island. This is important and must be celebrated not because we got votes from residents of the island, but because of its symbolic significance the site itself being a key site in the unfolding history of South Africa.”