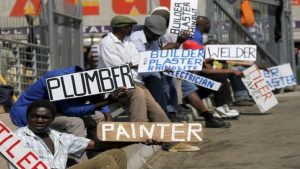 This was largely due to employment decreases in community services manufacturing, construction and business services.

However, according to the new data from Statistics South Africa, mining and transport sectors of the economy increased jobs.

Unemployment increased to 34.4% in the second quarter of this year

Unemployment is at its highest since Statistics South Africa started tracking the figure in 2008. Stats SA’s quarterly labour force survey shows that unemployment increased to 34.4% in the second quarter of this year, from 32.6% in the first quarter.

The survey showed that the number of employed persons decreased by 54 000 in the second to 14.9 million.

It further indicates that the number of unemployed persons increased by 584 000.

Economist and employment analyst Andrew Levy says, “That is an increase of 2.4% and that is a huge number and obviously we can put this to the post-COVID situation and the ongoing retrenchments that are being seen right across the economy, obviously also reflecting the very negative economic outlook we are facing. So all in all a serious wake-up call to everyone, government, the departments dealing with labour.”