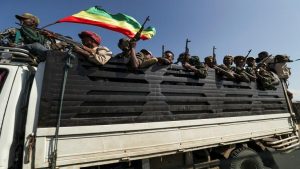 The Ethiopian government accused rebellious Tigrayan forces on Monday of killing 100 youths in the town of Kombolcha, as the United States expressed concern about Tigrayan advances a year into the fighting.

The Tigrayan forces led by the Tigray People’s Liberation Front (TPLF) denied the allegation. Spokesperson Getachew Reda said from an undisclosed location, “We don’t have to kill the youth. There was no resistance in Kombolcha.”

Government spokesperson Legesse Tulu did not respond when asked by phone and message for a comment on Getachew’s statement, but he had earlier in the day referred Reuters to the government statement on the alleged killing in Kombolcha.

The Tigrayan forces have been fighting the government for the past year in a widening war that has destabilised Africa’s second most populous nation.

Communications to the area are down and journalists are barred. On Sunday, Getachew, the TPLF spokesperson, said its fighters had pushed south to take Kombolcha and its airport. If confirmed, it would be the closest the TPLF has got to the capital since pushing into Tigray’s neighbouring region of Amhara in July.

Prime Minister Abiy Ahmed later that day called on all citizens to mobilise – threatening to exacerbate a conflict that has threatened to tear apart a country once seen as a stable Western ally in a volatile region.

The Government Communication Service said on Twitter, “The terrorist group TPLF has summarily executed more than 100 youth residents of Kombolcha in areas it has infiltrated.”

The statement gave no further details and Legesse, the government spokesperson, did not answer phone calls seeking comment about whether those killed were combatants or civilians.

While he has in general decried ethnic cleansing and other abuses in the war, US Secretary of State Antony Blinken earlier on Monday criticised Tigrayan forces, saying he was alarmed by reports that they had taken Kombolcha and Dessie, a nearby town that the Tigrayan forces said they had seized on Saturday.

Tens of thousands of ethnic Amharas have sought refuge from an escalation in fighting in Dessie. The government denied Dessie, which is north of Kombolcha, was under Tigrayan control.

The capture of Kombolcha would be a strategic gain for the fighters against Ethiopia’s military and their allies, who are trying to dislodge the Tigrayans from the Amhara region.

War broke out a year ago between federal troops and the TPLF, which dominated Ethiopian politics for nearly 30 years before Prime Minister Abiy Ahmed was appointed in 2018. The conflict has killed thousands of civilians and forced more than 2.5 million people to flee their homes.