Fiscus does not have capacity for basic income grant: Economists 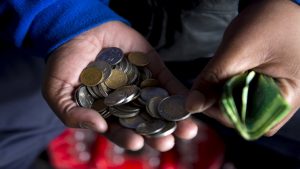 Industry experts say although a basic income grant will be much welcomed by struggling citizens, the fiscus does not have the capacity for it.

Last week, President Cyril Ramaphosa said government is considering introducing a basic income grant in the wake of unrest and have asked experts to come with funding solutions.

However, Economists warn that a basic income grant if introduced will be very difficult to implement.

It is estimated that 12 million people could take up the basic income grant if introduced.

Government will have to find R50 billion in extra income and 4% more money from the tax base.

This would require a more than 2% increase in the VAT rate, and government will have to also cut back some budget programs.

“We already have 18 million people in some form of grant and to add another 12 million to that means more than half of the South African population is going to be in some sort of government grant. I don’t think many countries can sustain that and I don’t think South Africa with its poor financial record and low tax base will not be able to do well under those circumstances,” says Mike Schussler, Economist.
Tough decisions need to be made in order to implement a Basic Income Grant: Thabi Leoka
2 days ago