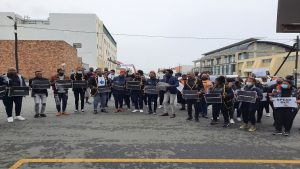 University of Fort Hare students have demonstrated outside the East London Magistrates’ Court.

They are demanding justice for the slain student Nosicelo Mtebeni.

The forth-year law student was brutally murdered in September.

The suspect implicated in Mtebeni’s murder is making his second court appearance on Tuesday.

He has been in custody since last month after abandoning his bail application.

Man accused of murdering Nosicelo Mtebeni to appear in court:

The family has said her death has left them traumatised.

Family spokesperson Teboho Mtebeni said Nosicelo was the beacon of hope for her family.

“As the family of Nosicelo Mtebeni, we are truly hurt about that [incident]. It is an incident that is so cruel in the area of Quigney in East London. I cannot even express my feeling about it. We were looking forward her changing the situation within the family but now it is not going to happen.”