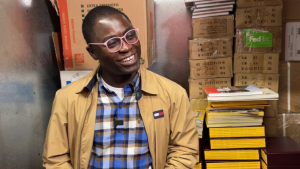 The Queens storage unit is already packed from wall to ceiling with photo books, but Ghanaian New Yorker Paul Ninson still finds space for another stack of vintage National Geographics.

The magazines, of which Ninson has every issue dating back 40 years, are a fraction of the 30 000 books he has collected since the COVID-19 pandemic began – all containing images from Africa or taken by photographers of African descent.

“My way to photography was just looking through magazines and photographic books. Some of these pictures are incredible. Some of these pictures tell stories of places, but mostly sometimes I wonder what it is those people in those communities contributed to these stories, by way of self-expression, of who they are. Do people in these communities accept how they are being depicted, especially the Africans?”  Ninson says, flipping through the pages.

Spread across 16 New York storage units and several other spaces along America’s east coast, Ninson’s collection is likely the largest of its kind.

Thanks to a successful crowdfunding campaign popularized by the photoblog “Humans of New York”, Ninson is sending his collection to Ghana’s capital Accra, where he plans to open Africa’s largest photography library.

Ninson envisions the “Dikan” Centre, meaning “Take the Lead” in his local language, as a museum-cum-learning institution, where aspiring African photographers can take workshops, rent equipment and access studio space.

Ninson began his collection shortly after arriving in New York on a photography scholarship in 2019. The COVID-19 pandemic fomented his obsession, with struggling bookshops offloading their inventories at reduced prices.

He accrued around 15,000 books that way, working odd jobs and taking out personal loans to cover costs.

“The pandemic changed us a lot, but for me what happened was that I was constantly e-mailing people – constantly e-mailing galleries, collections, personal collectors, telling them my vision of what I want to do. And that’s what lead me to having massive amounts of books. So during the pandemic, I was in warehouses packing books. I was in people’s basements packing books by myself. And that’s how I was able to amass a lot of books,” Ninson says.

When friend and “Humans of New York” founder Brandon Stanton discovered what Ninson was doing, Stanton chose to promote Ninson’s efforts on the blog alongside a crowdfunding campaign. It raised $1 million in a single day.

Ninson has doubled his collection since then, traveling up and down the east coast in search of new additions. More than 18 000 books have already been shipped to Ghana.

“In the beginning, when I was collecting these books and I was spending my own money, doing a lot of work, several hours, to pay for this – it was because I come from Ghana. I don’t come from a rich home, and to come here, the whole notion is to make it for yourself. But for me it was different. If you try to make it for yourself – in this industry it’s easy to become a superstar, but a superstar over what? There are a lot of people in Ghana who are desperate to be photographers, to tell the stories of Africa. So for me, the sacrifice would pay off. And that was my reward, always, that thought. And I was going to continue to work on this. I wasn’t going to lose hope. That’s me, that’s Paul Ninson. I never give up,” Ninson says.

But not all of Ninson’s experiences in the United States have been positive. After George Floyd was killed in June 2020, Ninson says he was awakened to the reality that he had long heard about from African-Americans, but had never before then truly understood.

“After George Floyd, his incident, I was very scared. I was like, ‘Oh, this is what they’ve been talking about.’ I was scared. And also, for some people to talk to you in a certain kind of way, to make you aware that you are black – in my mind I’m like, ‘What do you mean that I am black? I’m an African.’ So it took me some time to accept that I am black, because where I come from, we don’t talk about race – we talk about people, human beings, and we are very welcoming people. That’s something that I really had to adjust to. Yes, I knew blackness, but coming here and being in the system, you really know. And I think that is an experience that will stay with me for the rest of my life,” he says.

Ninson will return to Accra in December, where the books will be kept in a temporary facility while the Dikan Centre is under construction.

He hopes it will be finished by the end of next year.

“Sometimes people will see somebody like me differently. Why? Because the narrative which has been purported for years has been emboldened into people’s minds. And that’s affecting my country and my Africa and people like me. Why? Because we’ve left the space for so long for people to tell their own stories and to distribute their stories. And that is what I want to be able to fill, to be able to give the tools and resources to African photographers and to black people to be able to tell our own stories,” Ninson says.