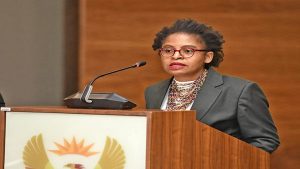 Government says it is on track towards ensuring that the country migrates from analogue to digital transmission by  March 31, next year.

South Africa, as part of the Region 1 countries of the International Telecommunications Union was supposed to have migrated to digital transmission by 2015.  However, that was delayed.

Communications Minister Khumbudzo Ntshavheni switched off the last analogue transmission site at Zeerust in the North West earlier on Wednesday.

She says, “What’s important for us is that this opportunity to switch off and meet the deadline of 31st March, allows our country to reap the digital dividend and be on same par with the technological advancements across the world and allow us to move to digital economy.”

Of the estimated 3.7 million indigent households, only a little over a million have registered for this assistance.

Ntshavheni has encouraged the public to register.

Where is South Africa’s digital migration?

In 2006, the South African government accepted the International Telecommunications Union (ITU) agreement that called for countries to migrate from analogue Television to Digital Television by June 2015.

The purpose of the mandate known as the Digital Terrestrial Television (DTT) process was to improve the quality of TV services and maximise the efficient use of the spectrum.

The South African government initially set the deadline to complete the migration process by 2011, however, this never happened as the programme suffered setback after setback during the technology negotiations process.

On March 18, 2015, South Africa started the process of migrating broadcasting signals from analogue to digital. However, recently Minister of Communications and Digital Technologies Khumbudzo Ntshavheni indicated that the television broadcast digital migration process is set to meet the 31 March 2022 deadline that President Cyril Ramaphosa announced during his State of the Nation Address earlier this year.

To assist the masses, the government says it will run an Analogue Switch-off message that will scroll on analogue TVs with dates to ensure that the population is aware and migrates before the set dates to continue receiving television services.

VIDEO: What is DTT?