Hamilton takes his 100th F1 win with victory in Russia 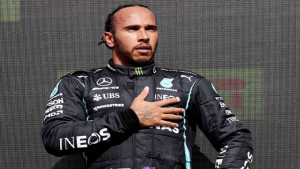 Lewis Hamilton became the first Formula One driver to win 100 races with a victory in Russia that sent him back on top of the championship.

Hamilton’s nearest title rival, Red Bull’s Max Verstappen finished second after starting the race in last place due to a penalty incurred by an engine change.

Mclaren’s Lando Norris started on pole position after a rainy qualifying on Saturday. Norris finished seventh due to a late tyre change after spinning off due to the changing weather.

Hamilton leads Verstappen by 2 points in the drivers’ standings.