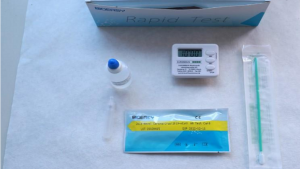 A 28-year-old, health worker at the Parkhurst clinic in Johannesburg, has been arrested for allegedly selling fake COVID-19 negative test certificates to travellers.

It’s alleged that the suspect was selling the fake certificates for R 500 each, without conducting a test.

He was arrested on Saturday night after being under surveillance by the City’s Group Forensic and Investigation Service department and the Johannesburg Metro Police.

Preliminary investigations have revealed that the suspect is not working alone.  More suspects are expected to be arrested as the investigation is ongoing.

Johannesburg Mayor, Jolidee Matongo says, “It’s quite unfortunate, we don’t need such people in our system.  We would like to encourage our staff not to engage in such corrupt activities because it compromises the whole country.  Imagine someone who has contracted COVID-19 and they are given a certificate which says they are negative.  That person will infect many people and some may succumb to the virus.”

The suspect will appear in the Booysens Magistrates’ Court tomorrow. He will be charged with fraud.

Below is the full statement: