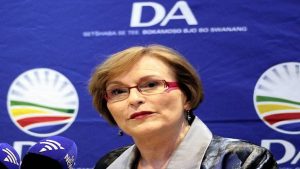 DA federal council chairperson, Helen Zille, has opened a case of assault in Gqeberha after she was escorted from a voting station by police.

The DA says in a statement that she was “frog marched” by a police officer from the premises while her arm was being twisted and she was threatened with being placed in the back of a police van.

The DA says Zille was at the Fernwood Primary School voting station where she allegedly encouraged voters in the long queue to be patient.

She was apparently accused of canvassing by other party agents and was then instructed to leave by the police officer.

The DA also says a cellphone belonging to her colleague, that was used to film the incident, was confiscated.