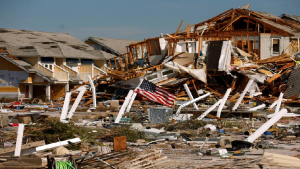 Lopez Obrador said on Twitter that thousands of civil protection forces, the defense ministry and the navy, as well as state utility Commission Federal de Electricidad (CFE) were prepared.

“I ask the people of the regions of Veracruz, Puebla, San Luis Potosi, Tamaulipas and Hidalgo to seek refuge in high places with relatives and in shelters that are being set up, “Lopez Obrador wrote.

Through Sunday, the NHC forecast Grace would dump 6 to 12inches (15-30 cm) of rain over large swaths of eastern and central Mexico, and up to 18 inches in some areas. The heavy rainfall would likely cause areas of flash and urban flooding, it said.

In Tecolutla, a resort on the Gulf of Mexico in Veracruz state, residents spent hours on Friday afternoon taking hundreds of boats on land to keep them safe.

“Here in Tecolutla, we’ve had a culture of prevention for many years,” said Ricardo Pardinas, who offers boat tours to tourists. “These weather phenomena have caused damage.”

Veracruz and its waters are also home to several oil installations, including Petroleos Mexicanos’ Coatzacoalcos port and Lazaro Cardenas refinery in Minatitlan in the south of the state.

It also doused Jamaica and Haiti, still reeling from a 7.2magnitude earthquake, with torrential rain.