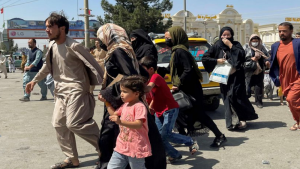 Unidentified woman saying she fears for her future and rights following the Taliban takeover of Afghanistan.

Speaking from the capital of Kabul, the woman says, ”I am worried about my future as a woman living here I have no assurance about my life.”

A senior Taliban leader has said that the role of women in Afghanistan, including their right to work and education and how they should dress, would ultimately be decided by a council of Islamic scholars

”I don’t know how much I can trust them. Afghan women and girls are having a hard time, it is their darkest time, they have lost hope,” the woman adds.

During their 1996-2001 rule, also guided by Islamic law, the Taliban stopped women from working. Girls were not allowed to go to school and women had to wear burqas to go out, and then only when accompanied by a male relative.

Those who broke the rules sometimes suffered humiliation and public beatings by the Taliban’s religious police.

”You know that the Taliban has now reached Kabul and everyone is anxious, and stressed and afraid, Afghan women and girls are more scared than others as their future is truly unclear and how they will be treated. As an active person in society in the recent years who lived and worked and was active, I am worried about my future as a woman living here, I have no assurance about my life. I don’t know when (Taliban) officially runs the government would they actually let us breathe or this is just an empty promise.”

She says, “The Taliban has said that women who wear Islamic Hijab can come out and work. It is not clear how much they would respect the promise and I don’t know how much I can trust them. Afghan women and girls are having a hard time, it is their darkest time, they have lost hope. They do not know what to do. As a representative of women who went to school who studied and were out in the society who were active and worked, I want to say that we really want to be present, we do not want to lose what was gained in twenty years, we don’t want to sit at home again, to be silenced again. I am here to ask you if you work in a related field the international community women’s rights organizations, human right’s organizations I ask you to support us raise your voices because of Afghan women because this is not what we deserve.”

“It has been three days since Taliban has been in Kabul. The presence of Afghan women and girls is reduced in the bazaar and the society outside of home because they are scared if how they are going to be treated and to be honest they are afraid of leaving their home. Today, I am here to ask for your help. If you don’t help Afghan women today and ignore them, remember that the world will not forget, it will be recorded in history and you will be remembered in history as those who dropped the ball when they were most needed.”

Meanwhile, US President Joe Biden has committed to getting all Americans and Afghan allies out of Afghanistan. He indicated that 18 000 people had been evacuated from the country since July and around 13 000 since the military operation at Kabul airport began following the swift takeover by the Taliban of the capital.