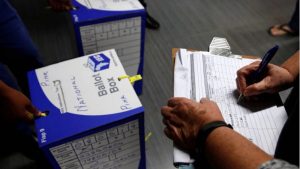 The Independent Electoral Commission (IEC) is set to consult with the Political Party Liaison Committee on Thursday to discuss Justice Dikgang Moseneke’s report calling for the postponement of the country’s municipal elections.

The Political Party Liaison Committee comprises of registered political parties, which are represented in the National Assembly, provincial legislatures and municipal councils.

Moseneke’s recommendations which considered scientific, expert and legal opinion suggest that free and fair elections won’t be possible this year.

“We go further to find that the scheduled elections are likely to be free and fair if they are held not later than the month of February 2022, “ says Justice Moseneke.

The report cites that mass gatherings for elections could undermine the country’s efforts to contain the COVID-19 virus from spreading.

Another concern is that political parties will not be able to campaign under strict lockdown restrictions.

IEC will be the final arbiter on planned October elections:

Executive Chairperson of the Institute of Election Management Services in Africa, Terry Tselane, explains the options available to the IEC if they choose to implement the recommendations.

“Parliament would have to need 75% of the national assembly and also six provinces vote for a constitutional  amendment,” he says.

Tselane has also indicated a second option, which he believes is the better option.

Findings of a survey conducted by the University of Johannesburg and the Human Sciences Research Council show that two thirds of the public support the postponement of the elections.

The IEC is expected to deliver its decision on the matter in the coming days.