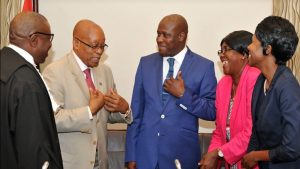 The hearing is to decide on whether or not to institute an impeachment process against Hlophe.

This is after he was found guilty of gross misconduct for trying to sway two Constitutional Court justices to rule in favour of former African National Congress (ANC) President Jacob Zuma.

The Judicial Conduct Tribunal’s decision on Hlophe was unanimous:

The JSC had been set to continue last month however, was forced to postpone due to the poor health of two of its members.

Wednesday’s closed proceedings are looking into the findings of the Judicial Conduct Tribunal. If the finding of misconduct is confirmed by the JSC this will lead to a vote in the National Assembly.

It is alleged that Hlophe told Justice Bess Nkabinde, who was writing a note on privilege for her Constitutional Court colleagues, that the issue needed to be decided “properly”.

However, the Judge President has maintained his innocence throughout the probes.