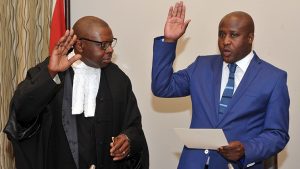 The Judicial Service Commission has voted for the impeachment of Western Cape Judge President John Hlophe.

The Judicial Conduct Tribunal’s decision on Hlophe was unanimous:

The Commission is expected to give reasons within 24 hours on their decision. Hlophe and the Constitutional Court have until September the 3rd to make submissions on why it should not recommend to President Cyril Ramaphosa that the Judge President be suspended.

The National Assembly will then vote to remove Hlophe.