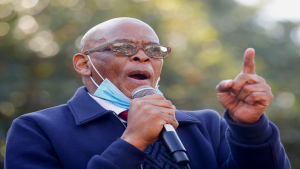 Magashule is seeking leave to appeal the court’s earlier ruling to uphold his suspension. This relates to his failure to temporarily step down as stipulated by the party’s Step Aside Rule, which says members facing criminal charges must vacate their positions pending the finalisation of their cases.

He also argued that the court prejudged the matter and was biased in its handling of his case with the ANC. Judge Jody Kollapen said the judgment will be out soon.

Last month, Legal expert Sanusha Naidoo said the dismissal of Magashule’s case by the High Court in Johannesburg is a lesson that internal party issues should not involve courts.

Naidoo said the judiciary gets nervous around political cases.

“There is a political connotation to these things. The fact of the matter is the pronouncement that was made around checking to see whether rule 25.70 was legal was justified. It had political connotations. You can’t ignore it and I think that when you start using the courts to fight these political battles then, of course, the court gets nervous and I think in this case the court realised that in the context of what was happening, I mean the entire application has been dismissed.”