Limpopo still to place a number of students in schools 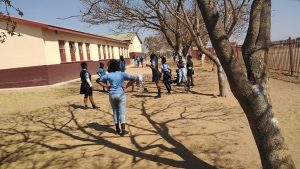 Authorities in Limpopo have been visiting schools in various districts to monitor their readiness for the new academic year. Education MEC Polly Boshielo monitored schools in the Vhembe district, while her Social Development counterpart Nkakareng Rakgoale visited the Sekhukhune district.

Although schools reopened this week, some learners have still not been placed in schools, especially in Polokwane, Phalaborwa, Tzaneen and Lephalale.

A number of pupils in the province are yet to be admitted to schools. Parents continue queuing at various Education Department offices in the five districts. The most affected areas are Polokwane, Lephalale, Tzaneen, and Phalaborwa. Parents say they are unsure if their children will gain admission in time.

Another challenge experienced at some schools is overcrowding. This is as learners prefer schools with high matric pass rates.

Parents fear that the COVID-19 regulations might be flouted.

SGB chairperson at Patrick Ramaano Secondary School, Albert Madisha, says there are not enough classes and that social distancing won’t be observed.

“Challenges are there, we got 2186 learners so we cannot bring in all grades so this means it is only grades 12s that are attending every day. The other challenge is that we don’t have enough classrooms. The other issue is that educators are using classes, the department could provide an administration block.”

However, MEC Boshielo has given assurances that all the learners will be admitted. She says she’s expecting a report from the department’s district offices on Friday.

“Unfortunately, I don’t have the figures with me, but when I check around, remember we have three hotspots Polokwane, Tzaneen and Lephalale, they were busy until late last night to make placements. I gave instructions that by the end of this week, not month, every child should have been admitted for sure. I will get the report by the end of Friday,” says Boshielo.

Mother’s appeal for placement for daughter

A desperate mother from Pretoria is appealing to the Gauteng Department of Education to place her daughter in a school closer to home.

The mother is one of the hundreds of parents left frustrated by the department’s online application system.

The system aims to place learners in suitable schools for the new academic year. But some learners were placed at schools they didn’t apply for, while others are left in limbo with no placement yet.

Back To School | Frustration over incorrect placement of Gauteng learners