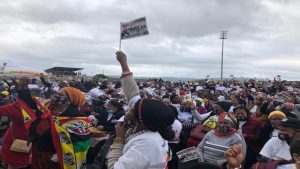 Eskom moved the country to stage 4 load shedding on Wednesday.

This is expected to last until 5am on Friday.

Speaking on the sidelines of the party’s main closing rally in Ulundi in northern KwaZulu-Natal, IFP deputy president iNkosi Mzamo Buthelezi is calling on government to intervene immediately.

“In a country where the electricity is interrupted now and then, investors don’t even think to go there and invest money. Existing businesses have to close down because while there is no electricity it means there is no business.”

“For ordinary people, it is even worse. So it means every time there is load shedding people have to throw away food that has gone rotten. So electricity is the very important basic infrastructure for us to be a country that attracts businesses,” adds Buthelezi.

The video below is the live stream of the rally:

On September 30, party leader Velenkosini Hlabisa launched the party’s election manifesto in Durban, saying the IFP offers the greatest hope to South Africans to escape what he says is the ANC’s failure to govern, deliver jobs and provide people with security.

Hlabisa said the IFP is the official opposition in KwaZulu-Natal and has a track record of good governance.

The IFP said it hopes to become the kingmaker in Gauteng after the November 1 Local Government Elections.