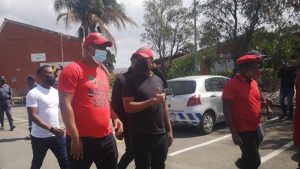 Economic Freedom Fighters (EFF) leader Julius Malema wraps up the final day of voter registration weekend by visiting some of the voting stations in Pietermaritzburg (PMB) in the KwaZulu-Natal midlands.

It is alleged that some  African National Congress (ANC) members have tried to block EFF leader Julius Malema from monitoring voters’ registration at one of the stations in KwaDambuza in KZN.

Malema, who was eventually able to enter the voting station says he will not allow any party to intimidate him

Malema has vowed to lodge a complaint with the Independent Electoral Commission (IEC) about an incident that happened in KwaDambuza in Pietermaritzburg on Sunday morning.

LGE 2021 | Chaotic scenes at a voting station in Pietermaritzburg

People have come in numbers to register, however,  many are not observing some of the COVID-19 regulations.

#sabcnews #sabckzn #LGE2021 #SADecides2021 Watch tensions at a voting station in KwaDambuza area outside Pietermaritzburg between ANC and EFF members. It was the first time EFF leader Julius Malema set foot in the area. pic.twitter.com/MaO0PE8b0b

#sabcnews #sabckzn Tensions broke out between EFF and ANC members in KwaDambuza area outside Pietermaritzburg. It was the first time EFF leader set foot in the area. pic.twitter.com/Pn6rGKyy14

#sabcnews #sabckzn There is a hive of activities outside a voting station in KwaDambuza area outside Pietermaritzburg where EFF leader Julius Malema is expected to continue monitoring voter registration in KZN. pic.twitter.com/DW0WCZpCuj

[HAPPENING NOW 🎥]: Leadership of the EFF walk the streets of Dambuza after members of the ruling party threatened that we will not leave.

There are no no go areas for the EFF. #RegisterToVoteEFF pic.twitter.com/Fcfy238ihZ

Malema was in Phoenix, KZN on Saturday where he called for peace in the area.

Malema says as the EFF they are calling for peace across the Phoenix area.

“I don’t want tensions, I want peace and those who don’t want peace are enemies of the EFF. Innocent people lost lives here in Phoenix, but that must not be attributed to every Indian you come across because to do that amounts to self-hate. There are a lot of Indians who are against that. It was a barbaric act of people who carried rifles and live ammunition and filmed themselves and took whatever they took and enjoyed shootings, innocent people. So I’m here to say to our people, despite what happened, we belong together and we will overcome all challenges together,” says Malema.