Marriages of inconvenience: the fraught politics of coalitions in South Africa 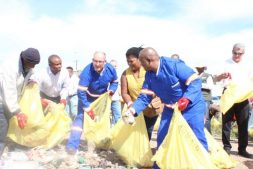 The popularity of the African National Congress (ANC), which has governed South Africa since the end of apartheid in 1994, has slipped in successive elections from its high of over 60%. First it declined to under 60% , then to below 50% in the cities of Tshwane, Johannesburg, and Nelson Mandela Bay in 2016.

Nonetheless, the Democratic Alliance (DA), the official opposition, shows no sign of benefiting from the ANC’s slack – hardly reaching even 30% of the votes cast. Instead, the ANC’s numbers have been absorbed by small, mostly new parties.

Inevitably, South Africa is in for many decades of coalitions. This is the central theme of a new book, Marriages of Inconvenience: The Politics of Coalitions in South Africa, which takes a forward-looking view of the country politics but also a historical one.

Political scientist Susan Booysen and the Mapungubwe Institute for Strategic Reflection, the independent think tank, have done themselves proud by assembling a team of 15 scholars to publish this authoritative 528 page volume. It shows both the nation’s track record of previous municipal and provincial coalitions, and what factors will influence future successes and failures in the new round of coalitions that will come after the 1 November 2021 local government elections .

South Africans ought, at the least, to remember their former Government of National Unity between 1994-97: this was a grand coalition of the then three largest parties in Parliament – the ANC, National Party, and the Inkatha Freedom Party – diverse in policies, but united in the intention to defuse the threat of continued civil war.

From 1983-89 South Africa was in a low-level civil war, including rioting, petrol-bombing, assassinations, wildcat general strikes, and massacres.

The political future will be markedly different, the authors say. In short, voters face a mix of parties winning an outright majority in some towns, but increasingly requiring coalitions to hold power in other towns. For this reason, South Africa will increasingly, but variably and intermittently, enter into interparty coalition arrangements in the years to come. (p.6)

Part of this book examines coalitions in other countries, whose lessons South Africa could heed. At one extreme, Mauritius had a coalition which lasted 15 years (p.453). At the other, Italy has suffered 30 prime ministers after World War II – of whom only four lasted five years or more. Belgium took 13 attempts over 493 days to negotiate a coalition in 2019; after their 2010 election, they took 541 days to succeed in forming a coalition. (p.462)

Read more:
What two books have to say about the political lifespan of South Africa’s ANC


South Africa’s political parties would do well to learn from Ireland, where the three largest political parties negotiated a coalition treaty over one hundred pages long. This stipulated measures and mechanisms for conflict resolution, plus agreed compromise policies on health care, education, housing, and foreign policy.

Marriages of Inconvenience examines South Africa’s sobering experiences with coalitions in the Western Cape and Kwazulu-Natal; and in Nelson Mandela Bay, Tshwane, Johannesburg, and Cape Town.

The rarest of all the country’s coalitions – so far – have been short ANC-DA coalitions in Beaufort West and Kannaland, (pp.52, 60) though these parties are adjacent on the country’s political spectrum. The most unlikely have been the Johannesburg, Tshwane, and Mandela Bay DA-Economic Freedom Front “confidence and supply agreements”. This is political science jargon for a minimalist agreement where one party agrees to vote with the other only on votes of no confidence, and on passing the annual budget.

Nelson Mandela Bay, in the Eastern Cape, provides readers with a grim lesson of all the reasons to wish to minimise or best of all avoid coalitions. Two authors in this book have each previously written a book about this city’s governance. The DA, African Christian Democratic Party, Congress of the People, Freedom Front Plus, and the United Democratic Movement (UDM) did indeed have a “co-governance agreement” between them both on substantive issues, such as not allocating public works jobs on party lines, through to procedures for consultation. (p.269)

Eagerness for power left both the DA and ANC vulnerable to extortion from the smallest parties. The UDM (with only two councillors) and the Patriotic Alliance (with only one councillor) both in turn demanded – and got – the mayoralty.

The UDM’s Mongameli Bobani’s first action on becoming mayor was to demand lists of all contracts up for tender, and all vacant managerial positions – flashing red lights. He fired the city manager, and appointed a further seven acting city managers, in his attempts to get his way. (pp. 383-4)

All DA appeals to UDM national leader Bantu Holomisa to replace Bobani fell on deaf ears. The inevitable result was the collapse of the DA-led coalition; a collapse of the following coalition; then a period with no mayor. This put many day-to-day operations into a tailspin.

This is not the only instance where the vulnerability of municipal staff to political threats from their mayor hurt South Africa. Prior to 2000, the post of city manager – then called town clerk – was on permanent staff. This was then changed to a maximum contract of five years, to expire one year after municipal elections.

The city manager is the CEO of the entire administration of a metropolis, where the buck should stop when anything malfunctions or ceases to work.

Read more:
Who stands to win or lose if South Africa were to hold all elections on the same day


Since 2000, the city manager has been appointed on a contract limited to a maximum of five years (p.297). This means that no city manager may dare refuse an illegal order from a mayor about appointments or tenders for fear of their contract not being renewed, or even being fired from their career job.

In practice, the situation is worse – municipal managers average only three and a half years before they are squeezed out by their political bosses; in the large metropolitan councils they average a mere 15 months before being purged. (p.277). The consequences are devastating – the bleeding away of competent leadership, and appointment of unqualified and sometimes unethical party hacks to, for example, run the sewage treatment plant.

Political interference in appointments and tenders are the prime drivers of corruption. South Africa urgently needs to return to city managers as permanent staff as speedily as possible. This will require a statutory revision.

This book will be valuable on every bookcase. It could not be more timely – the country is now a mere two months away from the next local government election, in which there are certain to be far more coalitions than ever before.

This article is republished from The Conversation under a Creative Commons license. Read the original article.