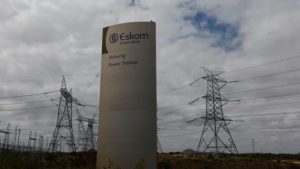 Eskom says the increased security measures that it has put in place over the last year have paid off after criminals targeted critical infrastructure.

The power utility says it deployed an additional 450 security guards to key sites and used advanced surveillance technologies to protect its assets.

Eskom has paid at least R48 million in its fight against theft and vandalism.

Eskom Spokesperson, Sikonathi Mantshantsha says the crimes are concerning as it increases electricity interruptions for customers.

Mantshantsha says, “There is definitely some organised crime, a lot of it happens at Eskom’s own facilities, and it would be fair to say that some employees cannot be totally excluded from some of the incidents that we have seen.

Mantshantsha says, as a result, Eskom has increased security measures – paying millions to ensure infrastructure is not damaged.

“This has had a very good outcome in the sense that there has been a significant reduction in the unplanned capacity losses. The Security measures that cost Eskom at least R48 million to increase security have really paid off,” added Mantshantsha.

Eskom makes major strides in its operational recovery process, cautions the path to sustainability will be long and hard pic.twitter.com/cmD0af00bi

The City of Cape Town says there has been a spike in vandalism of its electricity infrastructure in the Paarden Eiland area over the past few months.

Van Reenen says repairs and replacement of the infrastructure cost the city millions each year.

“We absolutely condemn these acts and are committed to improving the security at our infrastructure. Patrols to the area will be increased and additional fencing installed at the affected sub-stations. We appeal to residents to assist us by reporting any suspicious activities near electricity infrastructure to both the South African Police Service and the City so that we can bring an end to infrastructure theft and vandalism,” says Van Reenen.

In December, there was a massive power outage that hit large parts of the City of Cape Town. Several parts of the CBD, Woodstock and areas along the Atlantic Seaboard were affected.

VIDEO: City of Cape Town massive power outage to be investigated in December: