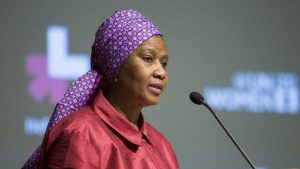 Phumzile Mlambo-Ngcuka’s recent appearance at an African National Congress (ANC) election campaign event in Gauteng, has fuelled speculations that she might be gunning for the party’s top position.

The former United Nations Women Executive Director held no punches –  calling out those who use public positions to amount wealth through corruption.

She made a plea to all her party’s candidates for the upcoming local government elections to upskill themselves in order to be able to deliver services that are needed.

Just last month – former Deputy President Mlambo-Ngcuka asked not to be deployed by her party to focus on her passion projects. On Thursday, she joined the ANC’s local government election campaign in Johannesburg. A move which sent tongues wagging – begging the question: is she making her way back into active local politics?

“I’ll cross that bridge when we get to it,  but I never really left the political sphere. We never leave,  we’re around and continue to make sure that our democracy functions,” says Mlambo-Ngcuka.

Mlambo-Ngcuka was candid about the cancers within her party, calling out cadre deployment.

She says public servants should be capable and focused on service delivery, a sentiment shared by the ANC Youth League’s Convener, Nonceba Mhlauli.

“The comrades who have come to run municipalities – we have to go to them to ask about what they know and we must be willing to help so that they can have the capacity that they need. No municipality must have country money when they cannot count their fingers,” says Mlambo-Ngcuka.

Mhlauli says the youth in South Africa is capable of solving some of the country’s problems.

Young women have come out to join Dr. @phumlambongcuka for a conversation with young women under the theme. “Towards Generation Equality: Celebrating The Life and Times of Mama Albertina Sisulu.” #VoteANC #BuildingBetterCommunities pic.twitter.com/deTbjOI8Hv