Nadal cruises past Berretini and into Australian Open final 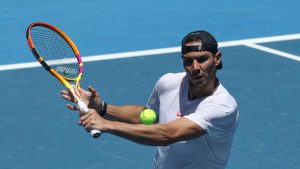 A win for Nadal in Sunday’s final against either Daniil Medvedev or Stefanos Tsitsipas will break a three-way tie with Novak Djokovic and Roger Federer and give him sole ownership of the record for most Grand Slam singles titles.

With rain bucketing down outside, Nadal 35 made a fast start under the closed roof of the Rod Laver Arena and took control by breaking Wimbledon finalist Berrettini’s serve early in each of the first two sets.

Berrettini finally came alive in the third and started forcing Nadal back with his forehands, a break of serve forcing a fourth set.

The Spaniard got the crucial break in the eighth game as the Italian’s unforced errors increased and another mistake allowed Nadal to convert his first match point after a battle that lasted two hours and 55 minutes.