National State of Disaster extended for another month 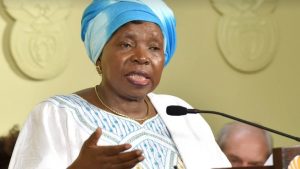 Cooperative Governance and Traditional Affairs Minister Nkosazana Dlamini -Zuma has extended the National State of Disaster by another month until the 15th of February.

The extension is granted in terms of the Disaster Management Act. The Act empowers the Minister to extend a State of Disaster on a month-to-month basis once the first three months have expired.

The Department says the extension has taken into account the need to continue augmenting the existing legislation. It says it also considered the contingency arrangements undertaken by organs of state and all other role players to respond to the impact of the National State of Disaster on lives and livelihoods.

The Department says its calling on citizens to continue following all the COVID-19 regulations by wearing a face mask at all times, maintaining social distance, avoiding closed and poorly ventilated spaces and large gatherings as well as the washing of hands with soap and water or use an alcohol-based hand sanitiser.

It says it’s also calling on all South Africans to heed government’s call to be vaccinated to achieve herd immunity and ultimately protect lives and livelihoods.

The new month-to-month extension officially kicks in on Saturday when the current one expires.

It will now be the 20th time that the State of Disaster is extended on a month-to-month basis.

Health Minister Dr Joe Phaahla has announced that Gauteng has officially exited the fourth wave of the coronavirus pandemic.

The National Institute for Communicable Diseases says 5 920 cases were identified across South Africa in the last 24-hours – representing a positivity rate of 14.3%.

Phaahla has warned that despite a noted decrease in COVID-19 related deaths, the Omicron variant is highly transmissible.

He was speaking during a virtual media briefing on government’s efforts to fight the pandemic:

“Gauteng province has officially exited the 4th wave this week and all other provinces have reached their peaks, the other 8 provinces, and are now on a decline. Of note is the fact that the decline in new infections is not a steep decline as was the incline. So this virus rises steeply but it goes down slowly. But at least it is going down and that is encouraging.”

“The Omicron variant has been spreading to various parts of the world. The pattern seems to be the same. Notwithstanding the reduced severity overall, the Omicron variant is still very deadly – especially for people of advanced age and also people with comorbidities and those who are unvaccinated.”