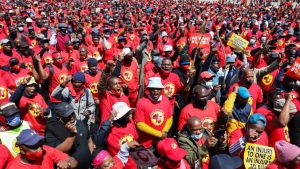 The National Union of Metalworkers of South Africa (NUMSA) has officially accepted the 6%  wage offer that was tabled by the main employer body, the Steel and Engineering Industries Federation of Southern Africa (SEIFSA), over a week ago.

NUMSA’s acceptance of the offer comes after SEIFSA, which represents the majority of steel and engineering companies in the country, decided to unilaterally implement its offer to non-unionised members on Wednesday.

NUMSA members who no longer wanted to continue with the strike also had the opportunity to accept the offer and go back to work. This left the union with no choice but to give in.

“We have taken a conscious decision that as a union, we will compromise and accept the current offer….for the sole purpose of settling the strike in the best interest of the workers. It is the NUMSA members who have paid the heavy price for this strike and it is in their interest that the union does everything possible to ensure that we resolve the strike as soon as possible as each and every day in a strike is a sacrifice – no work means no pay,” says NUMSA General Secretary,Irvin Jim.

SEIFSA  announced on Thursday that it had reached a landmark wage agreement with NUMSA.

SEIFSA CEO, Lucio Trentini, has told SABC News that a massive effort to reverse the devastating impact of the strike is needed.

“The intention of recommending an implementation to send a signal to the unions that have not yet accepted the agreement that this is the end of the road. This is the best final offer that employers that are members of SEIFSA can align themselves with,” says Trentini.